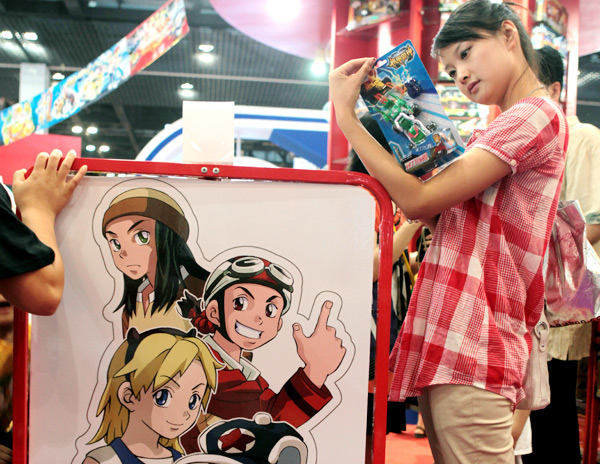 A girl looks at Alpha toys at an exhibition in Beijing. PROVIDED TO CHINA DAILY

Alpha Group Co Ltd, one of the country's top animation and toy producers, said it was bullish it would maintain its rapid business growth internationally by exploiting the value of the intellectual rights and properties it owns.

The surge in overseas business resulted from Alpha's efforts to successfully place its Chinese cartoon characters onto TV screens worldwide and tap their IP value through such activities as selling related toys, said Wang Jing, a vice-president of the Shenzhen-listed company.

Wang said his company's biggest advantage over other toy makers was its ownership of IPs, which could greatly increase the added value of the toys.

"We will carry forward the 'IP strategy' and hopefully we can maintain the rapid overseas business growth this year."

Alpha's going-global efforts started in 2009, when its flagship cartoon series Pleasant Goat and Big Big Wolf was broadcast in 13 Asian countries and regions.

The company said it took only the last two years for its new cartoon series Super Wings to become a global hit across more than 70 countries and regions, especially in Indonesia, Turkey, France and the Middle East.

The popularity of Super Wings is shown in the sales boom of goods based on the series such as toys and apparel. Alpha said it and its authorized dealers had sold merchandise worth more than $1 billion at home and abroad.

Super Wings tells the story of a group of jets flying around the world to deliver packages to kids to help solve their problems. "The cartoon series' presentation of scenarios and cultures in different countries is eye-opening and educational and appeals to a global audience," Wang said.

Besides business deals, cultural exchanges between countries are also an important force in attracting wider participation in the Belt and Road Initiative proposed by China.

Alpha, for example, worked with partners in more than 20 economies related to the initiative in terms of animation broadcasting, toys sales and IP licensing.

The Ministry of Culture has drawn up a five-year plan (2016-20) for cultural development along the Belt and Road, which highlights the task of helping animation and game companies in China expand to economies related to the initiative and promote Chinese culture.

Pony Ma Huateng, chairman and CEO of Tencent, suggested that Chinese animation and game producers use more "imagination and entertaining elements" to enhance the global influence of their original content.

"Many Chinese animation and game producers still target the youth segment, while animations and games are popular across all ages overseas," said Ma.

He had called on roducers to fully tap the potential of time-honored characters in Chinese culture to become modern international hits, like Disney's Mulan and DreamWorks Animation's Kung Fu Panda.