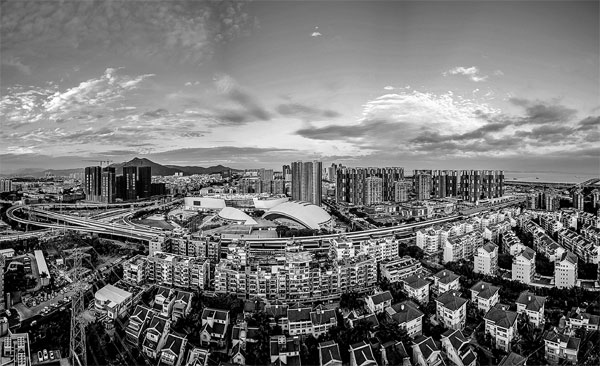 Xiamen, a coastal city in Fujian province, is in close proximity to Taiwan across the Straits. Lin Zhijie / For China Daily

Intellectual property has become a strong engine to empower the business development of and regional cooperation in Xiamen, one of China's special economic zones in East China's Fujian province.

"The city's development mode is transitioning from the efficiency-driven to the innovation-driven, which needs a complete system of IP strategy to ensure its competitiveness now and in the future," said Lu Linbing, director of the Xiamen Intellectual Property Office.

According to the city's three-year plan that focuses on the development of the IP industry from 2017 to 2019, Xiamen will build a new IP-themed town inside the city that will have a world IP-themed park, a specific area for the IP service industry and industrial parks for pilot IP projects.

The system, which includes an exchange center, investment companies, think tanks, IP banks and IP service institutes, will accelerate the innovation and the transformation of IP to products, ultimately serving the emerging new industries, Lu said.

Given its special location near Taiwan and its historic status as a crucial node on the ancient marine Silk Road, Xiamen was chosen last year by the central government to run the nation's only pilot project regarding the business operations of IP rights along the Taiwan Straits and the Belt and Road countries and regions.

As a result, the city government set up a Belt and Road IP operation and investment fund, with a startup fund of 80 million yuan ($12.1 million), to lead the domestic investment to potential IP projects in countries and regions taking part in the initiative.

When it is officially launched in 2020, the scale of the fund is expected to reach 6 billion yuan, which might then join the Silk Road Fund, a strategic development fund that targets investment opportunities arising from China's Belt and Road Initiative, according to Lu.

The banks can provide mortgages to those startups with patents, rather than any real estate or fixed assets.

The official figures indicate that banks have provided an aggregate credit of 910 million yuan to 36 companies with patent mortgages over the past five years, of which 400 million had been used.

Patent applications and authorizations in Xiamen have both grown by more than 20 percent over the past few years.

Lin Xiuqin, director of the IP Research Institute of Xiamen University, said the exchanges between IP professionals across the Straits are becoming more frequent.

"The rising awareness of IP protection and the capability of IP innovation have reinforced the investment confidence of the Taiwan companies," she said.

Since the university launched an IP doctorate program in 2014, it has attracted dozens of Taiwan students, including some famous businesspeople and celebrities, Lin noted.